The technological and exhibition core of the pavilion is the S.A.W.E.R. system. A device that autonomously produces water from the air using only solar energy. It irrigates a garden planted in the sands of Dubai and shows how to create an oasis in the desert. The principles of innovations and patents of the Czech Technical University and the Academy of Sciences of the Czech Republic are revealed to visitors by an underground niche in the garden and a didactic wall in the entrance gallery.

Here, the Heart of the Pavilion grows from the spring - the steel capillaries let cold water run down themselves and glass embryos as they grow through the walls and create a Cloud that shields the visitors and the garden. The work of Jan Dostál is the largest hand-shaped stainless-steel sculpture in the world. To get to the first floor, visitors climb around the equally monumental luminous installation of the LASVIT company, designed by Maxim Velčovský. The exhibit called Golden Rain is made of metal fibres and glass and combines traditional glass production with modern technologies.

Two other permanent exhibits are placed in the rotating exposition, which will change throughout the EXPO: the first one is the sculpture Fenix Energy from Jakub Nepraš, which depicts the flow of time and energy, on which today’s world depends, and in the second layer, it depicts the mental world of a human. The work with an internal projection is followed by an abstract painting Butterfly Effect by Adéla Oliva, which was created under the auspices of the Kroupa Gallery and depicts the balance of elements and human thinking.

Another exhibit is the installation Under the Wings of Fenix, which combines three world-unique technologies and presents a solution for the careful production and efficient storage of electric energy: a salt-cooled nuclear mini-reactor, patented by the Řež Research Center, can power a city, but also a spaceship; any excess energy will be stored in batteries guided by energy flow management from the company Fenix Group, which develops technologies for energy flow management in houses, complexes, or entire cities. The model of the energy self-sufficient region will then be complemented by nano-optics from IQ Structures.

The permanent exposition “The country for the Future” is opened by an interactive exhibit The Future of Manufacturing – a wall of personal 3D printers from the company Průša Research prints out pieces of a puzzle that are then used by the visitors to build a three-dimensional statue. The statue is reflected in the installation called Fluidum from the authors Petr Vacek and Adam Cigler – a kinetic system of eighty-five robotically controlled mirrors transforms the reflection of the spectator and his surroundings like a vertical water surface.

The future of three-dimensional printing is also presented by the 3D Arm – a robotic arm that was created by the company Fillamentum in cooperation with Brno University of Technology and Tomas Bata University in Zlín. This technology prints using an entirely new ecological cartridge made of desert sand and degradable bioplastics made from waste fats. The technology is followed by another fully automated exhibit, We Speak Plantish from the company PSI. This phenotyping line can read plant genetic information based only on their reactions to light and music.

The central exhibit is Venus – the largest polished glass sculpture in the world from Vlastimil Beránek, which directly communicates with the dual exhibit of the Darkov Spa and the company Crystal Caviar: glass sculptures Darkov Waves from the same author are presented inside columns of water, with bronze cuffs that are covered in growing crystals of healing brine. The healing properties and medicinal procedures will be revealed by a virtual reality, that will transport the visitors into the Darkov Spa and briefly transform them into spa guests.

Vlastimil Beránek also designed the sculptures decorating the pavilion rooftop SkyBar. The glass sculptures Lovers connects spirals in the colours of sand and water and the melding of the man in blue and his lover in amber create the illusion of green – the same way the S.A.W.E.R. system creates water from the air and brings green to the desert. And the more than two-meter-high Black Bone statue is made of 6,000-year-old subfossil oak, a unique material that is mined from the depths of the earth and is returned to the world by the company Subfossil Oak.

The original form of prehistoric tree trunks, in which information from the end of the ice age is hidden, is revealed by Subfossil Forest, which connects to the desert oasis in the pavilion garden and leads the visitor to the largest exhibit of the national exposition - the almost five-meter statue Robots Victory, which Jaroslav Róna created from a single piece of granite. The work, which was created a hundred years after the premiere of the play R.U.R. in the National Theatre, refers to the archaeological monuments of extinct civilizations, before which people bow in admiration and get chills on their back and at the same time, the statue warns people against self-destruction.

The last two exhibits connect the exposition with the national restaurant. Alga Oasis from the Microbiological Institute of the Czech Academy of Sciences is a mystical glass palm tree, that shows how to use proper cultivation in a photobioreactor to burn CO2 in the air and grow algae in the water, which can then be used as food supplements. The Hydroponic wall from the company GreenTech, which is placed directly in the restaurant, then enables the chefs to season the dishes served to the customers with fresh herbs right in front of their eyes. 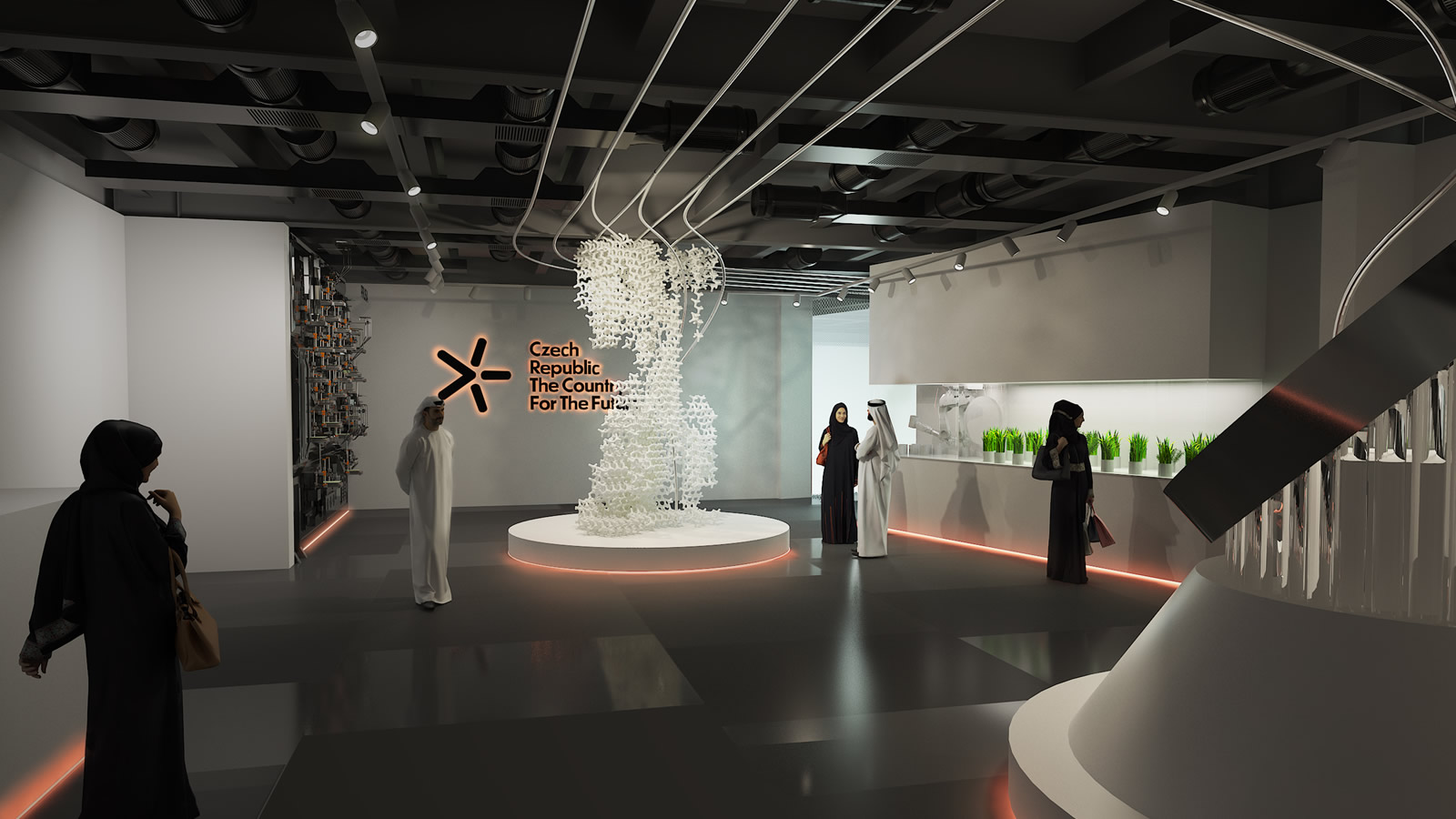