Water created by the S.A.W.E.R. system is drinkable

Scientists from the University Centre for Energy Efficient Buildings of CTU have connected a mineralization unit WatiMin, from the company EuroClean, to the prototype of the S.A.W.E.R. system, which creates water out of the air using solar energy and which is capable of cultivating the desert using subsurface cultures (solar-air-water-energy-resources). The technological core of the national exposition at the EXPO 2020 in Dubai is a joint project of the CTU and the Czech Academy of Sciences, but private companies will also participate in its construction.

"Our system creates distilled water, which is easier for us to store, but we have to treat it for further use" says docent Tomáš Matuška, the man in charge of the development of S.A.W.E.R. at UCEEB CTU, "for the irrigation of plants, the water is enriched by the photobioreactor supplied by the Institute of Botany of the Czech Academy of Sciences, the unit from the company EuroClean makes the water potable."

The devices were connected in the UCEEB laboratories in Buštěhrad, where a mobile version of the S.A.W.E.R. system is being tested in a special room that simulates the atmospheric conditions of the United Arab Emirates.

"First, the treatment machine filters the water and enriches it with minerals, namely with calcium, magnesium, and potassium, thus creating a high quality, tasteful and potable water of the highest world standard - but we could add other elements and literally create any type of water on demand. WatiMin uses electrolysis, or rather UV rays to disinfect the water and get rid of any potential microbial contamination", explains Jaromír Šnajdr, the director of the company EuroClean s.r.o.

Along with the General Commissioner of the national participation at the EXPO, the first person to taste the water made by the S.A.W.E.R. system was Saif Mubarak Fadel Al Mazrouei from Abu Dhabi, the president of the company Bin Fadel Group, which already expressed interest in the license for the construction of the S.A.W.E.R. system.

"Water for the people, animals, and plants is needed by the entire Persian Gulf, especially in the places, where there are no roads," said Saif Mubarak Fadel Al Mazrouei "the S.A.W.E.R. system interests me to the extent that I am willing to try it on my land even before the start of the EXPO."

Two types of the S.A.W.E.R. system will be created for the General World Exposition EXPO 2020 in Dubai. The first type, with a capacity of 500 litres of water per day, will be a part of the pavilion, irrigating the oasis growing out of the sand around the pavilion. The second type - the already existing one - is fully mobile and can create up to 100 litres of water per day in extremely dry conditions with no infrastructure whatsoever, in Riyadh for example.

"For me, this is an exemplary demonstration of how the private sector meaningfully engages in the preparations for the national participation at the General World Exposition," adds the General Commissioner Jiří F. Potužník, "other Czech companies are also participating in the creation of the S.A.W.E.R. system through sponsor donations and same will be true for the pavilion." 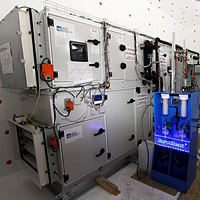 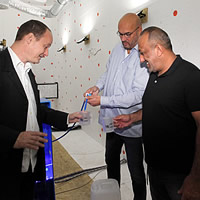 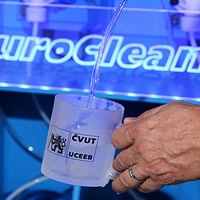