Although the first World exhibition in 1856 in London gave a space to discoveries and inventions, and although in the coming decades the EXPO featured prototypes of locomotives, telephones or microscopes, science has disappeared from many expositions. But at EXPO 2015 Milan returns - Czech Republic in cooperation with the largest laboratory complex of the European Union Joint Research Centre organizes from 1st to July 14th two-week program Days of Science.

"We wanted to keep the tradition of Czech expositions - for example at EXPO 1958 Brussels gained the electron microscope of Armin Delong one of the gold medals, but we wanted also contribute to the theme of EXPO 2015 "Feeding the Planet, Energy for Life " with the presentation of discoveries and innovation, " said Commissioner General of the Czech Republic Jiri F. Potužník," and having the JRC in Ispra just next to Milano, we asked them to cooperate and Days of science can be broadly international."

JRC Ispra laboratory is the largest hub of the European Commission, where two thousand scientists solve actual problems of the European Union - from the Galileo space project through sustainable technologies to research of chemicals in everyday use. Indeed, one of the guides at the European Pavilion at EXPO is (next to farmer Alex) scientist Sylvia.

"JRC Ispra addressing issues that are not just about half a billion Europeans, but around the world – it is a unique complex that utilizes the capacities of scientists and research institutes in all Member States," said David Wilkinson, Commissioner General of the EU Pavilion.

Days of Science consists of five two-day expert panels, which are thematically linked to a slogan: "Feeding the planet, energy for life" – the first day scientists will meet in the Czech pavilion at EXPO, the second in laboratories JRC Ispra. The themes are Nanotechnology and molecular science (1st–2nd July), Energy (2nd–3rd July), Biodiversity and sustainability (6th–7th July), Life style diseases (10th–11th July), and Education and research (13th–14th July).

A special event on the agenda will be 10th July: a renewed premiere of Karel Zeman movie based on Jules Verne's stories "A Deadly Invention" - a film from 1958 picturing the abuse of science will be screened also at the Film Festival in Karlovy Vary, in the Film Museum in Turin, in the Czech pavilion at EXPO and in the Czech Centre New York. 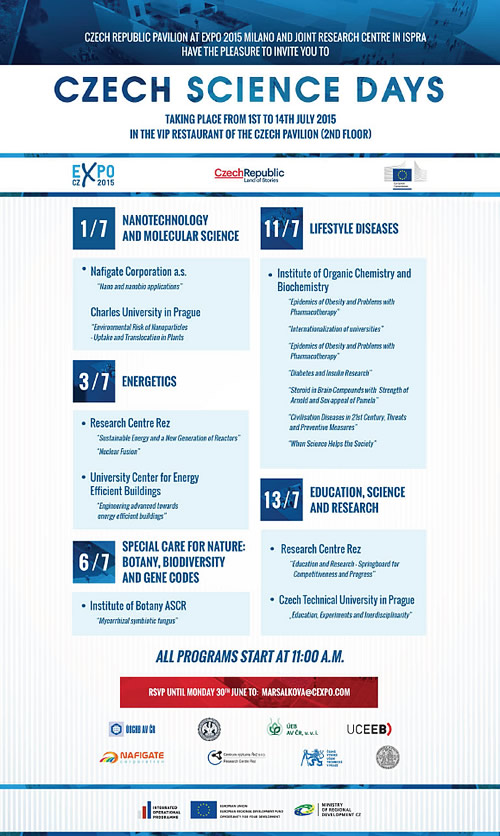