Prague Zoo has the unique opportunity this year to participate in the EXPO 2015 world’s fair taking place in Milan, Italy. The aim of Prague Zoo’s presentation at the fair is to introduce itself to the world and, at the same time, demonstrate the relevance of the modern zoo.

Prague’s zoological garden houses almost seven hundred animal species and draws nearly 1.4 million visitors every year. Extraordinarily popular with the public, it is the country’s second-most-visited tourist destination after Prague Castle. In 2014, TripAdvisor, the travel website, ranked it the 7th best zoo in the world.

However, in this day and age, Prague Zoo is no longer just an attractive tourist destination: it is an institution pursuing long-term efforts to save endangered animal species. It manages studbooks for 14 animal species and participates in projects to protect wild animal populations and their natural habitats. Under some of its conservation projects, endangered animals are released into the wild in their original homelands.

It is to these activities that Prague Zoo would like to introduce visitors to this year’s World Expo in Milan. Its flagship projects are represented by the unique “e-Bolide” installation, the work of Czech visual artist Jakub Nepraš. In this sculpture, which stands around three meters tall, visitors will find a total of seven crevices, in each of which they can see captivating footage of various animals and their native habitats – animals and habitats to the protection of which Prague Zoo has a long-standing commitment. Visitors can see, for instance, Przewalski’s horses in Mongolia; gorillas and forest elephants in Central Africa; gharials in India; various bird species in Southeast Asia, as well as dice snakes in Prague’s Troja district.

What is more, three of e-Bolide’s screening crevices are able to conjure up 3D optical illusions. Special cameras capture the position of the viewer’s head and shift the video layers to match his eye movements. E-Bolide can now be found on the roof of the Czech Pavilion. When the Milan Expo is over, it will be moved to Prague Zoo’s grounds to stand near the future Rákos Pavilion, already under construction.

Projects presented by Prague Zoo through the e-Bolide installation at Expo 2015: 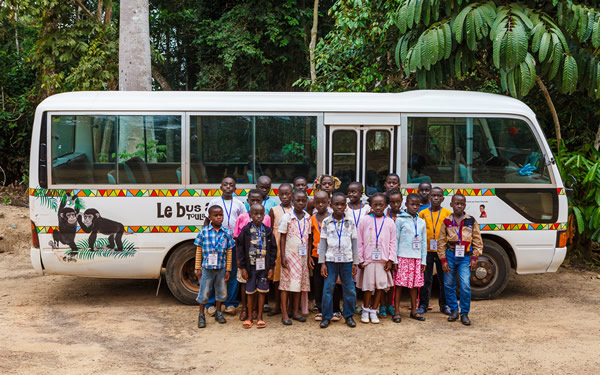