On 12th August, the first eight modules of the national pavilion of the Czech Republic arrived from Vizovice to the universal world exposition EXPO 2015 in Milan. There will be a total of forty five modules and at the end of September and beginning of October, KOMA Modular will build a three-storey elegant building surrounded by water from these modules in only one month. The Czech Republic is therefore one of the first countries to start building its original pavilion for EXPO 2015.

“When we confirmed our participation in EXPO Milano 2015 to Italian organizers last spring, our serial number was 123,” recollects Jiří Potužník, General Commissioner for participation of the Czech Republic in EXPO 2015, “thanks to KOMA Modular, we are now among the first three countries out of sixty to begin building our pavilion.”

Following six months of negotiations with organizers on the final look of the pavilion designed by the architecture studio of Chybík and Kryštof, the Czech Republic accepted the pavilion construction site on 9th July.

“The first preparatory phase consisted of creation of detailed drawings and namely of obtaining a building permit,” Martin Hart of KOMA Modular explained regarding the first transport of pavilion modules from Vizovice to Milan. “The second phase is already the production, transport and building of the pavilion. As one of the first builders, together with the organizers we need to strike out new paths. However, we still manage to keep the schedule.”

KOMA Modular should transfer the completed pavilion to the Czech Republic by the end of January next year. In February and March, partners of national participation in EXPO 2015 will install individual parts of the exposition and test operation will commence in April. The universal world exposition will start on 1st May and will last until 31st October 2015. So far, almost 150 countries confirmed their participation and the organizers estimate that the exposition will be visited by up to 20 million people. 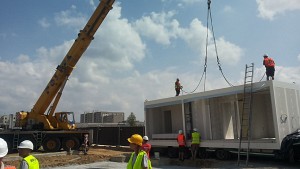 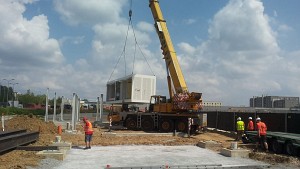 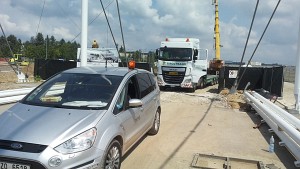 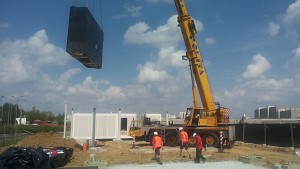